Baby Boomer Reflections: Eighteen Special Years Between 1946 and 1964 will be available on Amazon by mid-May. Please visit www.babyboomerreflections.com to learn more.

The word Jook is an old African-American term, meaning to dance. In the early part of the twentieth century, it was spelled differently and combined with another word to become a foundational part of our lives. Remember when playing a song cost a nickel and you could hear six for a quarter?

The jukebox was popular between the 1940’s and the mid-1960’s with their heyday occurring during the 1950’s. After World War II, nearly three-quarters of all records that were produced in the good old USA went into jukeboxes, made primarily by Rock-Ola, Seeburg or Wurlitzer. Jukeboxes progressed from plain wooden boxes to light shows with marbleized plastic and color animation.

Rock-Ola was named for David C. Rockola, the gentleman who founded the company that originally made pinball games. Two Rock-Ola jukeboxes, the 434 Concerto and the 1422 were featured on the Sitcom, Happy Days. Another model, the Rock-Ola President, only one of which is known to exist, is valued at approximately $150,000.

J.P. Seeburg started his automatic piano manufacturing company in the Chicago, Illinois area in the early 1900’s. After struggling with competition, J.P.’s son took over the business, and in 1949, his company engineered a mechanism that could play both sides of fifty records, so a true one hundred select jukebox became a reality. Six years later, Seeburg had increased that capacity to a two hundred select machine. A Seeburg model 100-C, a very colorful jukebox with chrome glass tubes on the front, mirrors in the display, and rotating animation in the pilasters, was also featured on Happy Days.

Wurlitzer is the oldest producer. It was primarily a large theater organ manufacturer, and its organs created sound for silent films. Wurlitzer dominated the coin-operated phonograph business until the introduction of the 45-rpm. Its mechanism could handle only twenty-four records and it played only one side. Wurlitzer never became a dominant jukebox manufacturer, although its 1946 Model 1015, referred to as the “1015 bubble,” became a pop culture icon after more than fifty-six thousand were sold in two years. 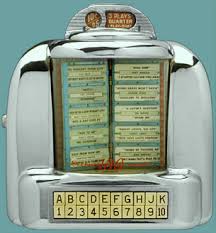 Jukeboxes once received the newest songs first, even before the songs were played on the radio. In 1995, The U.S. Postal Service issued a twenty-five cent stamp commemorating the jukebox.

5 thoughts on “Jukeboxes were the rage!”